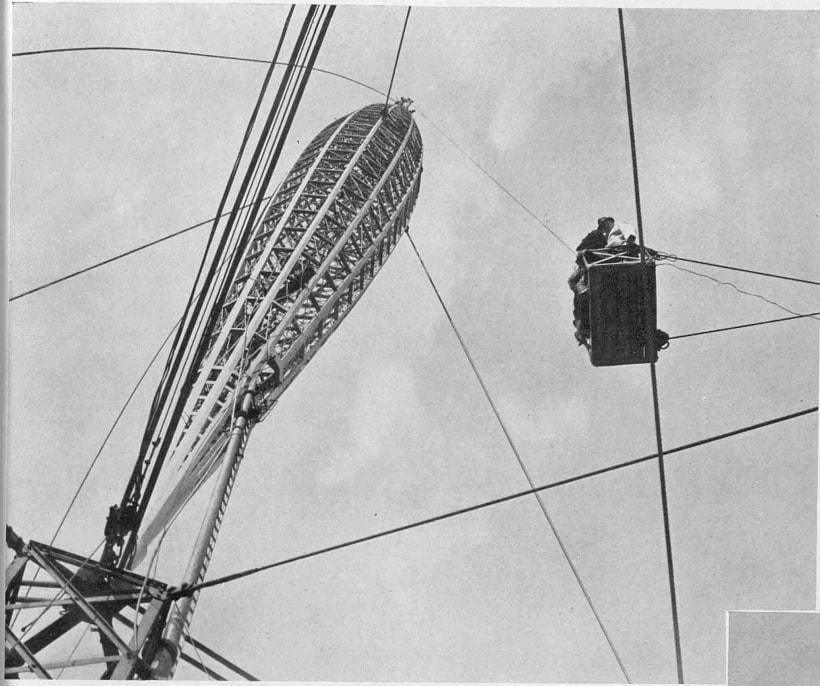 “I saw a blade which rises in the sky held by hardly nothing at all” reads an understated plaque on the Queen Elizabeth Walk. It commemorates one of South Bank’s lost icons. Where this plaque now lies, once stood Skylon, an architectural marvel that was commissioned for the 1951 Festival of Britain.

The legacy of the Festival still endures right across South Bank, however, very little in the way of physical structures have survived, with the Royal Festival Hall the only building which still stands today. Almost all of the ground-breaking architecture, artworks and sculptures have since been destroyed and of all the lost relics, none have quite caught the imagination of the public quite like Skylon. There have been numerous rumours ever since about Skylon’s fate, with theories circulating that it was thrown in the Thames or River Lea, or that it was even buried under South Bank’s very own Jubilee Gardens. 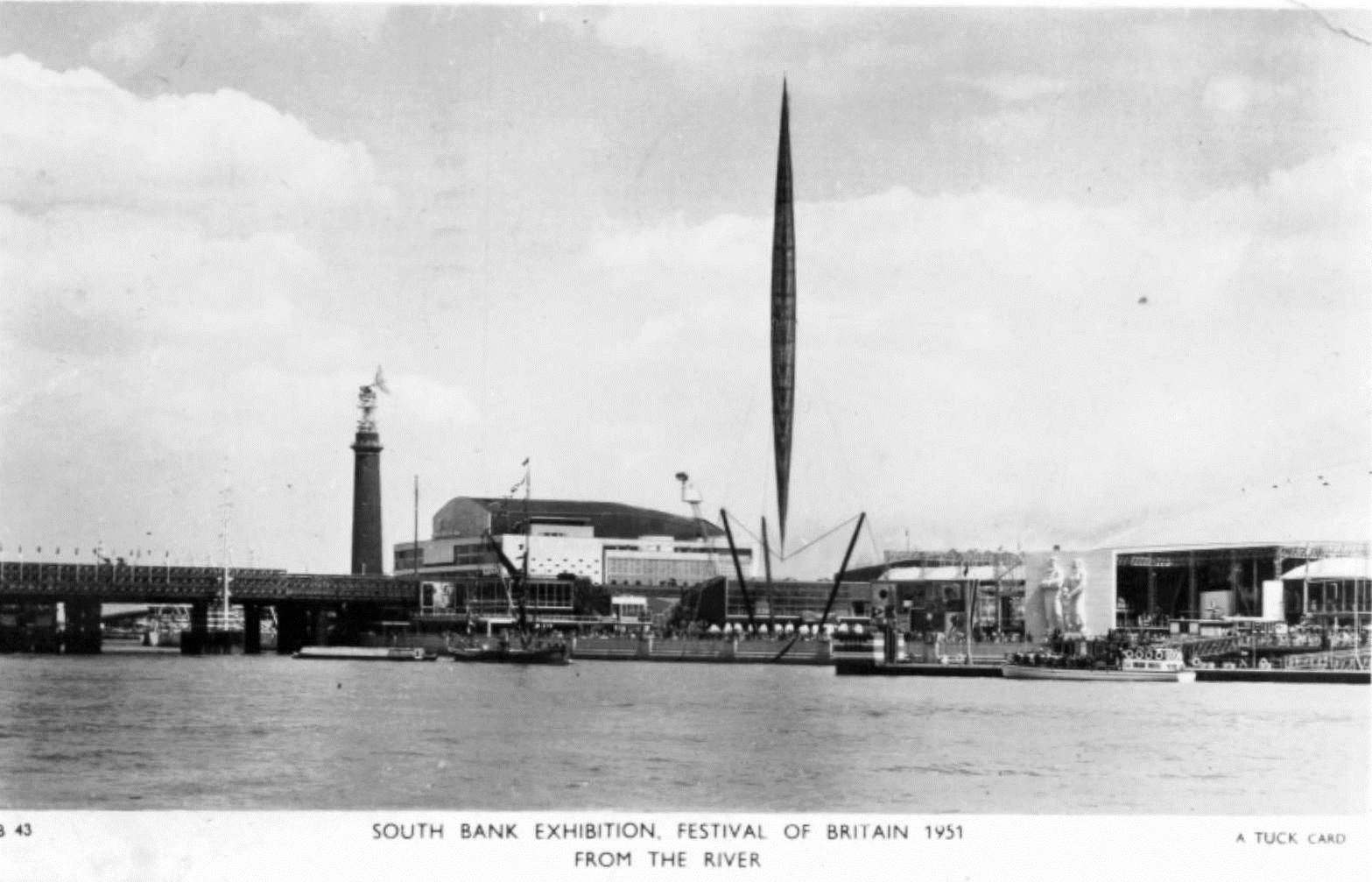 How Skylon came to be a part of the Festival of Britain is an intriguing story in itself. Skylon is one of just two structures not built or planned by the organisers themselves, who instead ran a competition for the design of a ‘vertical feature’ after the Festival’s committee decided that there should be a tower to act as a marker on the site. The criteria for the structure was vague in a bid to attract a wide range of potential designs and in the end was won by two young architects - Hidalgo Moya (29) and Philip Powell (28) - out of nearly 200 entrants.

According to Moya, because competition entrants were not allowed to see the designs of the other festival buildings, they decided on creating a structure that would ‘float above the other constructions’ so it would be guaranteed to stand out, no matter what it was built next to. In fact, their original plan was a balloon-based design, which had to be abandoned because Powell and Moya realised it would have required in excess of the world’s total supply of helium to create!

Original Architectural Plans for Skylon drawn up by Moya and Powell

So instead of balloons, they devised a cigar shaped structure to look, in the words of Powell, ‘a bit like an airship turned on its end’, held in place with a series of cables; wanting to make it obvious to the public that this was a not a tower with a usual solid base. It was this entry that won, but aware that their design was so unconventional, bold and daring, Powell and Moya sought the advice of structural engineer Felix Samuely, who helped refine Skylon to make it appear even more gravity defying than before. Samuely had realised that most of the proposed supporting cables and bulky connectors were unnecessary. Instead, using one hydraulic jack under each of the three pylons to induce tension, plus continuous twin cables looped and disguised under cleats, ‘Samuely had transformed (Skylon) into something so simple and clean looking that it seemed quite remarkable that it could remain standing’ as Moya himself remarked.

The finished design now fittingly embraced the imminent dawn of the space age. In a Festival that was supposed to share a glimpse of Britain’s prosperous future, it was no wonder that Skylon, which looked like it had been plucked from the world of science-fiction, captured so many people’s imaginations. 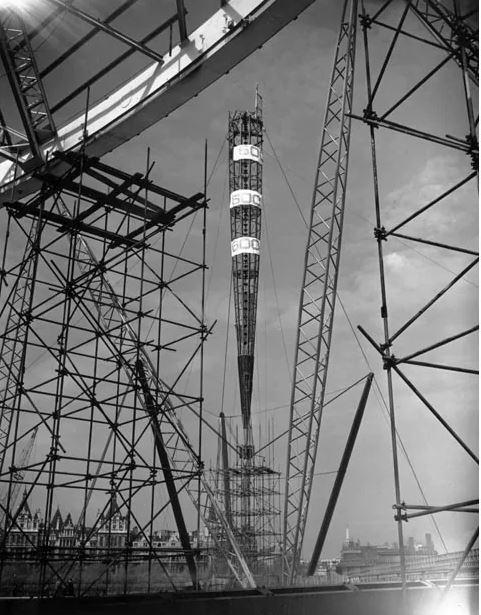 Skylon mid-construction, which caused large amounts of interest and speculation from onlookers to what it was.

Standing at 300 feet and weighing 100 tonnes, it was an awe-inspiring sight as it rose from the banks of the Thames, suspended as in mid-air. To put that into perspective, the London Eye itself is 443 feet high, so Skylon would have stretched into the sky well over the halfway point of today’s iconic South Bank structure. In the days before the abundance of high-rise buildings, you can visualise just how much Skylon would have stood out.

“At night it was lit from inside by hundreds of lightbulbs, and by day, when it was windy, the air rushed through the aluminium louvres that ran up the length of its central section, and made a humming sound." 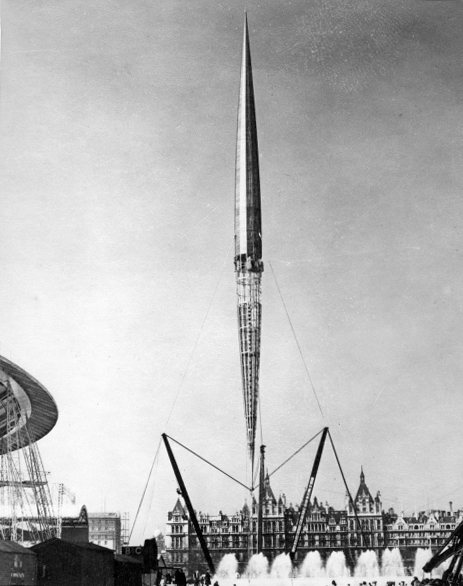 Skylon fully raised but with half of its full aluminium cladding still to be added.

But what of Skylon now? Where did it end up? Documentaries have been made; newspaper articles written on the subject. BBC Radio 4 launched a campaign to find the truth and former artistic director of the Southbank Centre, Jude Kelly, even proposed sending divers into the Thames to search for it, dubbing it South Bank’s very own Loch Ness Monster. Behind all the myths and legends of Skylon’s fate, though, is a less romantic end. After years of debate and searching, it was the campaign led by BBC Radio 4’s Front Row programme who finally got to the bottom of the truth, which did not lead, as many had thought, to the bottom of a river. Instead, like so much of the Festival’s infrastructure Skylon, after being was torn down on the orders of Winston Churchill, found its way to scrap metal dealerships. Along with the roof of the Dome of Discovery, Skylon was sold to George Cohen and Sons Scrap Metal Dealers, with some of the metal fragments made into a series of commemorative paper knives and other artefacts.

Like a 'golden feather' at night according to one Pathe newsreel. It's hard to disagree.

Campaigns to bring a new Skylon 2.0 back to its home on South Bank have sprung up on a semi-regular basis ever since, most recently in 2011 to mark the Festival of Britain’s 60th anniversary. Maybe one day it will return. Phillip Powell said himself that “It would be rather fun to recreate it”, but did add “if it was put back up again, I worry that it would be rather lost; London's skyline was very much lower 45 years ago." Maybe then, Skylon is best remembered for what it was and how it captured the hearts and minds of a British post-war public who had never seen its like before or since.