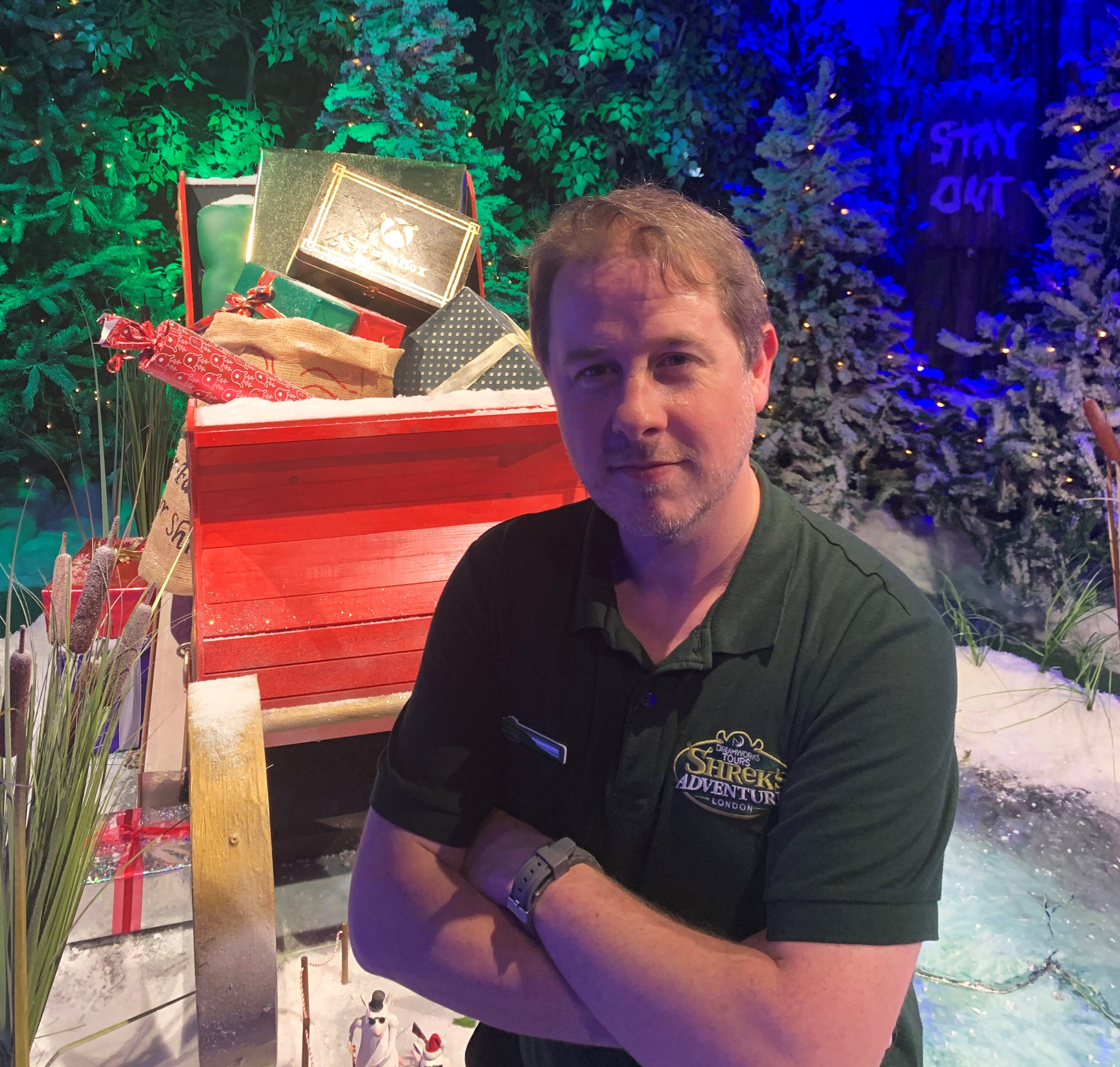 The immersive theatrical experience, Shrek’s Adventure! based on the popular animated film series, along with other DreamWorks characters, opened in 2015. The tour centres around a fictional Travel Agency, DreamWorks Tours, who schedule flights aboard a magic bus to various destinations from the DreamWorks stable. Due to a series of mishaps, the intrepid explorers find themselves stranded in Far Far Away and, with the help of an array of colourful characters, must embark on a hilarious misadventure to obtain ingredients for a Magic Potion that will get them back to London before the evil Rumpelstiltskin gets hold of them! It’s a race against time but, above all, a lot of fun.

So who is behind the magic of Shrek’s Adventure! and who makes the characters come to life? Enter, Kevin Haney. Meet the actor turned production manager who is now in charge of creating the bonkers experience, Shrek’s Adventure!

What does the Performance Operations Manager role entail?

I am responsible for both the Performance (Acting) and Entertainments (Costume Character) teams on a daily basis. I set up both departments at launch and have been evolving and managing them since then. We have come a long way in the past few years and every day can throw a new challenge our way. I am also responsible for creating and implementing seasonal shows, usually taking place during peak periods and holidays, like the Festive Grotto that is taking place this December. I created the first Shrek Grotto back in 2017 and we have been adding new aspects to it each year since. This year is definitely its strongest so far!

How did you get into the role?

I joined Merlin Entertainments back in 2003 at the original London Dungeon (London Bridge) as an actor. At that point I was a jobbing actor in London, mainly focusing on straight plays and stand-up comedy and sketches. I would work by day in the Dungeon and then perform around London in the evenings. The Dungeon was my day job, a great way to hone my skills, so I decided to progress in the role by day while still performing by night. I also started getting experience in Operational Management of the entire attraction, which is kind of like being a stage manager alongside the performance. I had progressed into the role of Performance Operations Manager by the time the London Dungeon moved site in 2013. Once we had established a slick operation, I looked around at other roles for another challenge and became interested in working alongside DreamWorks for their first complete attraction launch with Merlin Entertainments. The launch of Shrek’s Adventure! was probably the most challenging time of my career and I look back on it with a sense of pride but also of wonderment that I managed to get through it! It was a complete change of brand and tone too.

How do you go about creating a show?

Unlike the Dungeon, Shrek’s Adventure! is using licenced characters from the DreamWorks universe. The main tour had already been written by the time I came on board to train the actors to perform it. The scripts and events for the main tour had been signed off and approved and you need to respect that, while also making sure the actors keep it fresh. A tweak or change in the tour can take months of approvals and sign offs before it even goes to rehearsal. In the case of a seasonal show we have a little more room for manoeuvre. In creating these I will adhere to the DreamWorks tone and multi-level humour rhythms in creation (making it as enjoyable for the adults as the younger demographic). Meaning that you will never know what to expect – even for something as traditional as a Grotto the surprise and delight element is terrific. Ideas come from DreamWorks properties, the reputation the studio has and my own experience of what audiences are looking for after 16 years in the industry.

What advice do you give the actors?

The advice I give to actors when working in an attraction like this comes from my experiences throughout my time in London. You can train exhaustively and read all of the books on theory and practice that you can get hold of, but you shape yourself as a performer by being in front of audiences. A pilot becomes more skilled the more hours they spend in the air and I believe this applies to actors the more time they spend in front of audiences in their varying roles. In a time when repertory theatre is not as common as it once was, this is the next best thing. Also, treat every job with the same respect, no matter which role you are playing in the cast or as a collective. Reputation is everything.

What effect do you want to have on the audience?

We want the audiences to have an engaging and enjoyable time. We want the younger guests to have solid “bragging rights” in the school playground and the older guests to get something out of the shows that they didn’t initially think they would. It really is for everyone if you let the magic take you! The Grotto experience has been described as one of the most original in London. It’s not just meeting with Santa it’s a show complete with catchy songs and fun elements. I don’t want to give anything more away!

What’s your favourite part of the job?

Not to sound like a soundbite – but it really is the smiles on the children’s faces when they meet a character or are surprised by a special effect. They are so invested in the experience it is a huge responsibility to maintain that throughout their time with us. I also like working with actors of varying experience and skillsets. It is a creative role for the most part and I count myself lucky that I have regular work in an industry where this is never guaranteed.

When we launched Shrek’s Adventure! DreamWorks were very hands on with the attraction and I remember briefly meeting Jeffery Katzenberg (a founding member of DreamWorks SKG alongside Steven Spielberg and David Geffen) which was very intimidating. He has been a HUGE part of Hollywood history for decades now and has produced many of my favourite films. He is the cliched Hollywood producer stereotype, and really cared about what we were delivering. We also had a morning with Jack Black in our Green Room, he was doing a photoshoot for Kung Fu Panda 3 onsite and turned up an hour early. He was everything you hoped he would be and it was great watching the team go into the Green Room and react to him being there. He signed a picture that I have by my desk in our office.

Is the Grotto the only element of the attraction that guests get to experience the festive vibe?

Not at all, we have snow, Christmas decorations and theming throughout the main tour which will give everyone that visits some festive cheer. When you meet Shrek you’ll notice that he is dressed in a Santa costume so you can get that awesome Shrek Christmas selfie! The tour also has some Christmas elements that will surprise guests on their way around. The Grotto is an additional element that you can choose to add but is well worth it!

It’s got to be the BFI Southbank. I am there regularly and love the environment and respect they afford film as an artform. It is the best place to watch a classic, or even a new release, and I feel truly happy when the lights go down and I’m transported to another world for two hours.