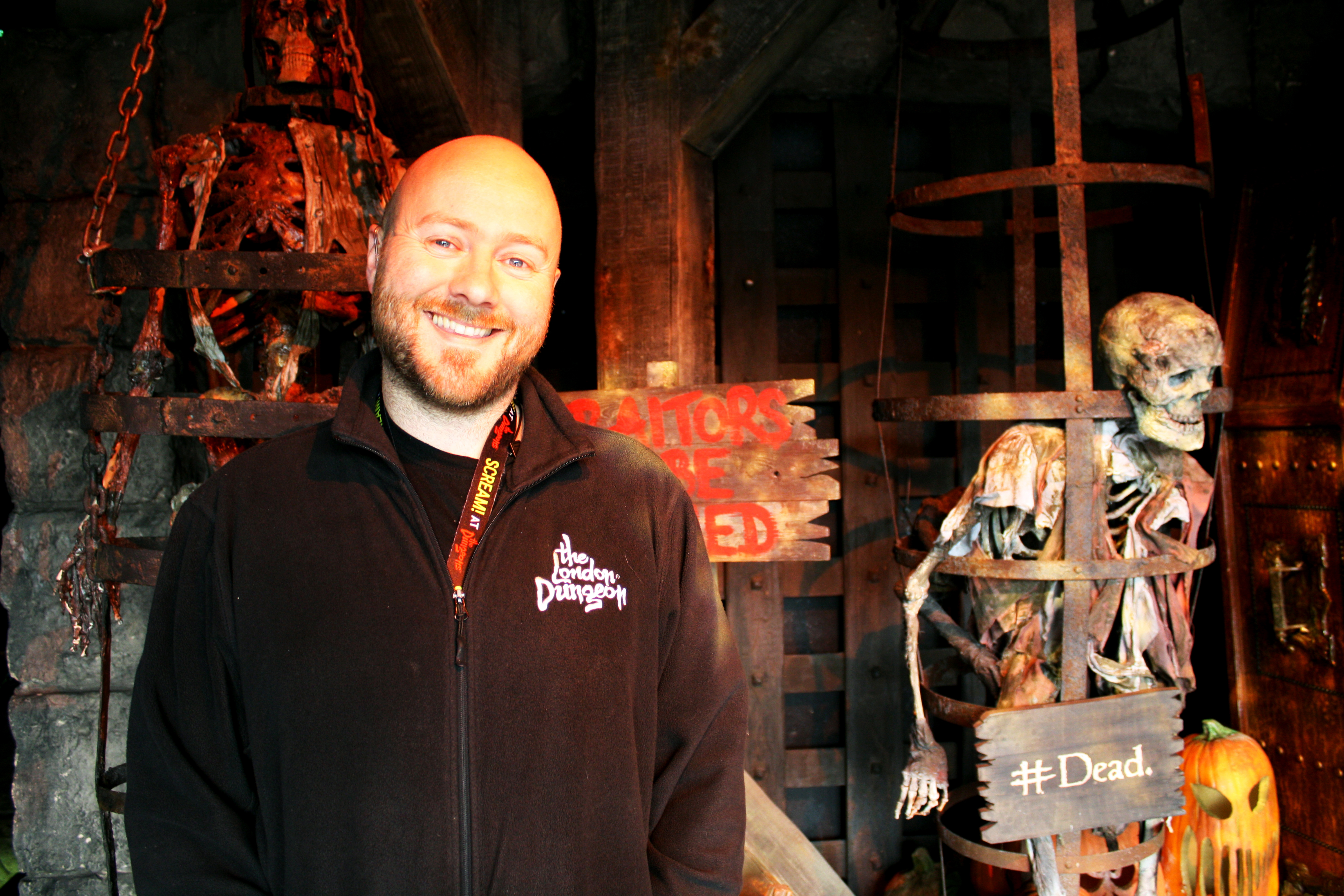 There is only one place to be this Halloween – The London Dungeon. If you’re looking to be sickened, spooked and downright terrified, The London Dungeon is your risk of choice... Taking you back to the ‘bad old days’ you get to meet the likes of Guy Fawkes, Jack the Ripper, narrowly escape the torture chamber and even experience the plague.  But who do we blame for bringing London’s perilous past back to life? That’s where performance manager, Phil Matthews comes in. Starting as an actor at the Dungeon himself, Phil is now Performance Manger at the Dungeon and guilty for creating the sickening scripts and story-lines performed on the tour of the Dungeon. We sat down with Phil to find out more about what it takes to shake the unshakable. Read on…if you dare!

What does the performance manager role entail?

My role entails hiring and directing all the actors who perform in the attraction, as well as making sure the whole tour is of the highest standard, constantly monitoring the shows to see where we can tweak them to make aspects even scarier or funnier. I also create new shows to keep the tour fresh and give people a reason to keep coming back.

How did you get into the role?

I started as an actor at the London Dungeon originally in around 2005, when I worked as a jobbing actor. I would leave to other performance work and come back to the job. One of the great things about the performance roles at The London Dungeon is that it gives actors a steady income, whilst still allowing you to work on your craft. Eventually, I made the decision to stay and progress within the performance department because I loved the Dungeon brand.

How do you go about writing a script?

There are a lot of considerations. The starting point will always be picking a bit of dark history that you can turn into a show that is engaging, and either scary, fun, or both. Each individual script needs to work as its own show, but also as part of the tour as a whole, so I will look at where it fits. After this would be developing the story and looking at what special effects can be used to make the show even more exciting. Something I am mindful of when creating a show is that it will always be performed by up to 50 different actors, so this will always play a part in writing the story.

What advice do you give the actors?

The Dungeon is an amazing place to hone your acting skills. There is always something new to find in the shows if you keep pushing your performances to the next level. You are performing to, literally, thousands of people a day, which will give you great stamina and can really put you in tune with performing to a live audience.

What effect do you want to have on the audience?

It really depends on the show. For the tour, we want the audience to be on a knife edge, never knowing what to expect next. The bread and butter of the Dungeon is that we play on anticipation to give you a good scare! The tour is carefully balanced to be terrifying in parts mixed with more funny and disgusting elements. We are here to highlight how horrible history has been over the years, which at times can be really funny. Our court show is a good example of this, here we have a character who is sentencing people to death for the most ridiculous things –such as weeing in a well – which shows you just how ludicrous some laws have been over the years!

What’s your favourite part of the job?

Every day is different, one minute I can be casually talking about buboes, the next directing an actor. Getting to work with actors and direct shows on a daily basis is a fantastic experience. I also love the dark side of life, so I get to be immersed in that every day!

What are some of your favourite facts / parts of history featured in the London Dungeon?

The Jack the Ripper case is endlessly fascinating, and an integral part of London’s dark history so getting to explore this story and the history is one of my highlights of the Dungeon. The Plague is also a highlight for me – to look at how it was dealt with back in the day is so interesting. You can’t imagine that people just dug these huge plague pits and piled the bodies in!

Which rides / sections do visitors get most spooked by? Are there any amusing stories you know of or can share about visitors getting particularly scared?

The Jack the Ripper section always gets people scared. We have had many occasions of visitors losing control of their bodily functions. We had someone faint, and when I asked him what he thought was the cause, he said he was scared of the dark, blood, and small spaces. He came to the wrong place!

What can we expect for Halloween?

Well, as the Home of Halloween, you can always except a good scare. We have also added a couple of new seasonal shows for October, to explore the story of Jack the Ripper in more detail than we ever have. We wanted to go through the whole case, from giving more insight into the victims to hearing stories of the press and sensationalists who twisted the story to their own advantage.

Naturally, I love the National Theatre and BFI Southbank. I love working in an area that is so rich in culture and entertainment and am proud that we are a part of that.