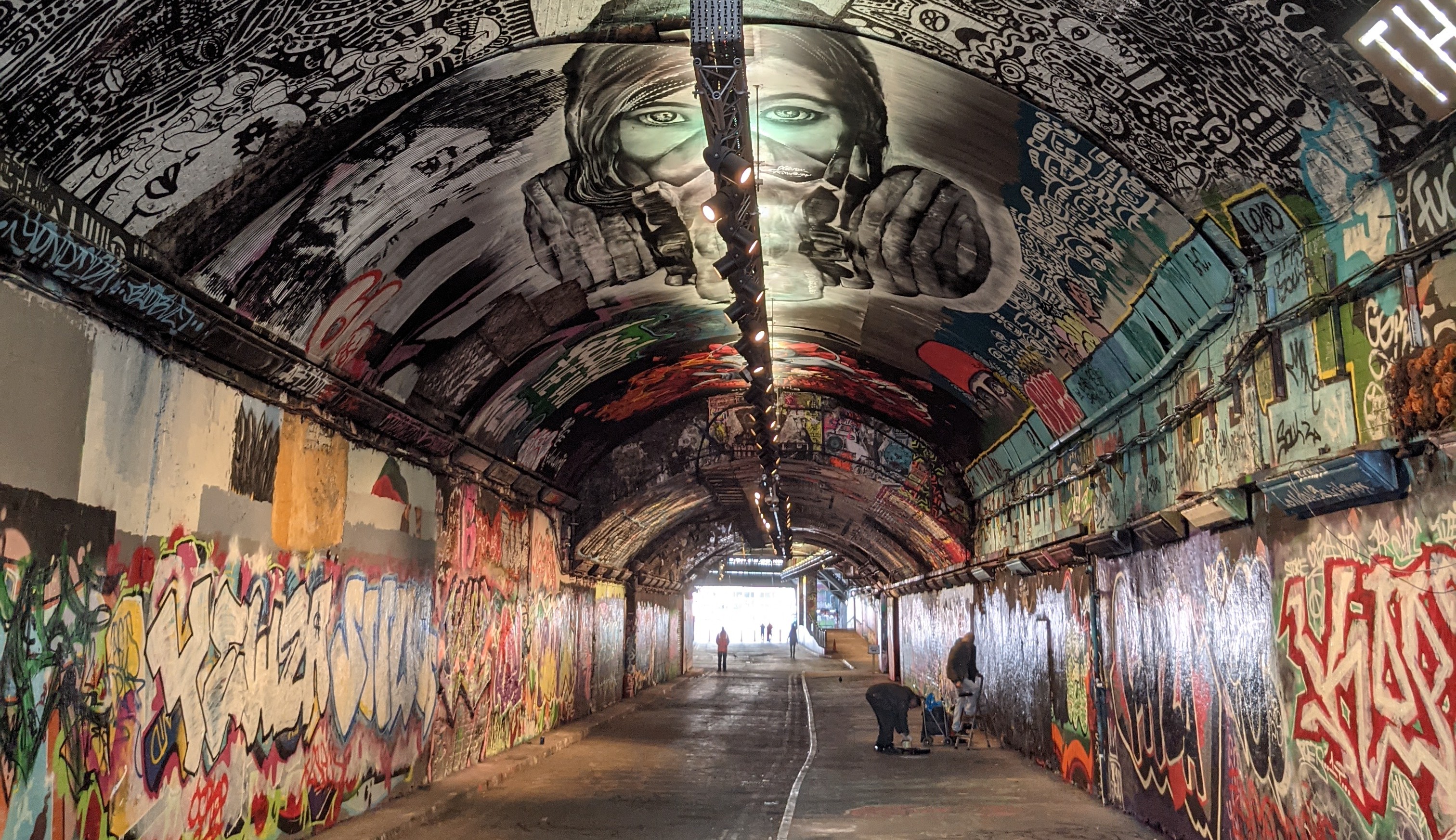 Since 2008, Leake Street has been home to some of the best graffiti and street art in London, when Bansky and several other notable artists transformed what used to be a taxi waiting area for Waterloo’s old Eurostar terminal. Today, this tunnel of colourful arches is a constantly changing landscape, where anyone who fancies picking up a spray can and making their mark can hone their craft next to professional and experienced artists alike. Now this space is starting to be recognised as an important cultural landmark too as visitors come from near and far to soak it all up. To get a flavour of what it’s like to be part of this iconic scene, we spoke to veteran Leake Street artist Sophy Robson on what these arches mean to her, how she started out and how she challenges gender stereotypes in the world of street art and graffiti.

Sophy Robson encapsulates what Leake Street is all about, a former novice who has gone on to become one of London’s most prominent female street artists and now even runs her own workshops to inspire girls to get into graffiti too. Growing up, Sophy was always familiar with graffiti and street art, through her brother, the friends she hung around with and a couple of ex-boyfriends.

“My interest in it grew through travel, my work as a nail artist and, seeing how it had developed, I was attracted to try it and that’s what got me started. It was the scale and freedom of it that I liked from day one.”

Sophy is passionate about challenging the preconceptions and stereotypes that surround this art form and make people realise it’s not all ‘tagging’.

“Leake Street and Old Street were the first places I knew of you could do graffiti legally without being challenged in London. It’s an example of a derelict urban space being completely transformed by its use as a spot for graffiti and street art. People go there specifically for the graffiti and it’s where you can see good and bad art or try out painting yourself. As I go there so regularly now I’m familiar with its history and often answer the public’s queries about the rotation of the artwork and if it’s legal. People are fascinated by the culture. I think the more people understand and have a connection to graffiti the less threatened by it they will feel.” 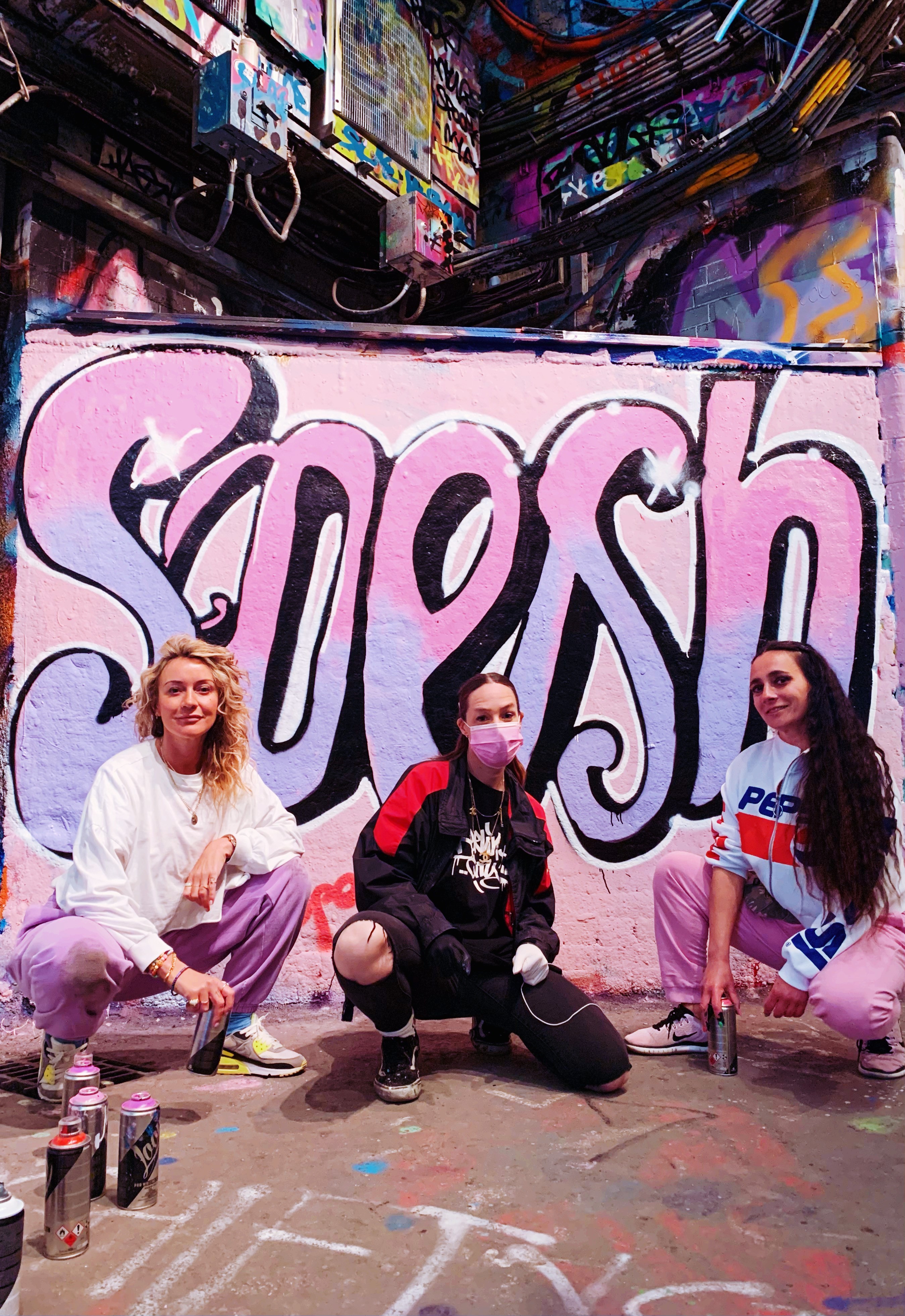 Sophy’s initial goal when starting out was to create feminine graffiti that stood out and would inspire more young girls and women to become involved too.

“I just felt it was all really masculine and I wanted to add something different to the landscape. I was just painting my name at first and using feminine imagery.”

Sophy felt that having more feminist artworks and graffiti out there would in turn inspire other young women to realise that they too could pick up a spray can and see that it’s not purely a male pursuit. In turn, this has led to the hugely popular Girl's Can workshop that Sophy runs on a regular basis

"When I did the Girls Can event I was amazed at the turnout. It was all different ages, classes and backgrounds. People had bought their kids, some women came on their own it was empowering - I know that word gets used a lot but it was! "

The subject of feminism has become more important in Sophy's work the longer she's been involved in the scene. Now she wants to provide an alternative to the stereotypical view that graffiti and street art is a masculine activity.

We asked Sophy what she would say to any budding young female street artists out there who are interested in carving a name for themselves on Leake Street?

"I would say try not to be intimidated -  go and do your thing. Women should be supporting each other not forming little cliques against each other. If anyone wants to paint with me they are welcome." 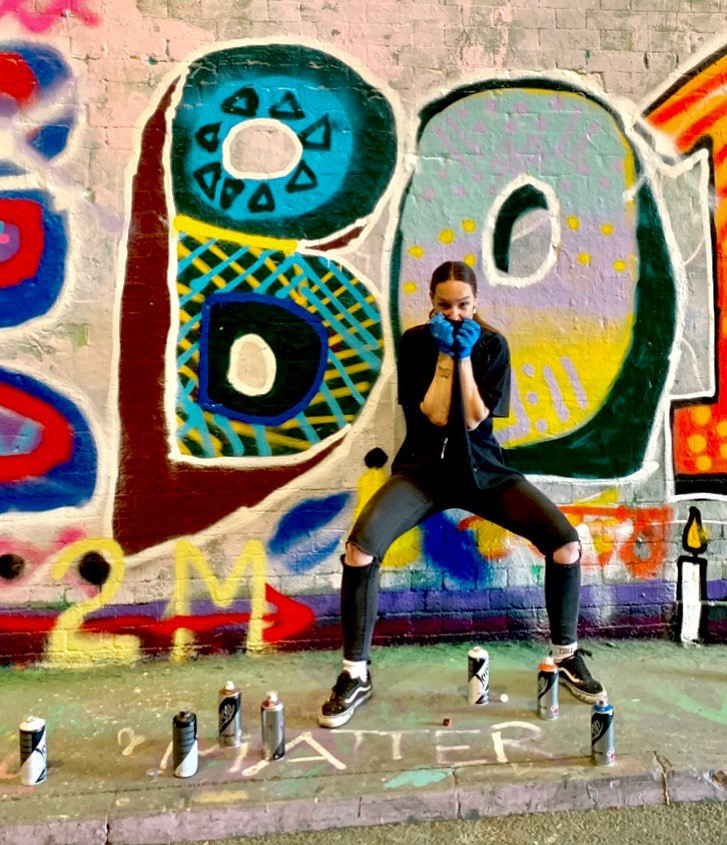 Since Sophy's initial aim of creating feminist messaging in her work, she's now started getting into promoting even more important social causes and has been inspired herself by the reaction she gets from creating murals with a strong, positive, social message.

"I feel like engaging with the public and painting positive messages is really important. The feedback I get when I’m painting is people respond to it, particularly children."

Sophy has recently applied for Arts Council funding so she can create and paint more public murals in local communities whilst involving different local groups in the design process, especially, says Sophy, "people who do not feel they have a voice". The importance of public art which is accessible to communities is at the core of Sophy's philosophy.

"It inspires creativity and good feelings and can transform a run down and neglected space. There needs to be more value attached to it."

Sophy sees Leake Street as providing a crucial role for the accessibility of public and community art. It's not just street artists that use the tunnel as a creative space either, Sophy mentions how many different people, from dancers to skateboarders and rappers to other artists go to Leake Street to use it as a backdrop for their own work.

"There are often emotive and political subject matters displayed (in Leake Street). Especially if someone dies or there is a big event like the Black Lives Matter protests or Covid. People go there to let their feelings out even if it’s just to write their name." 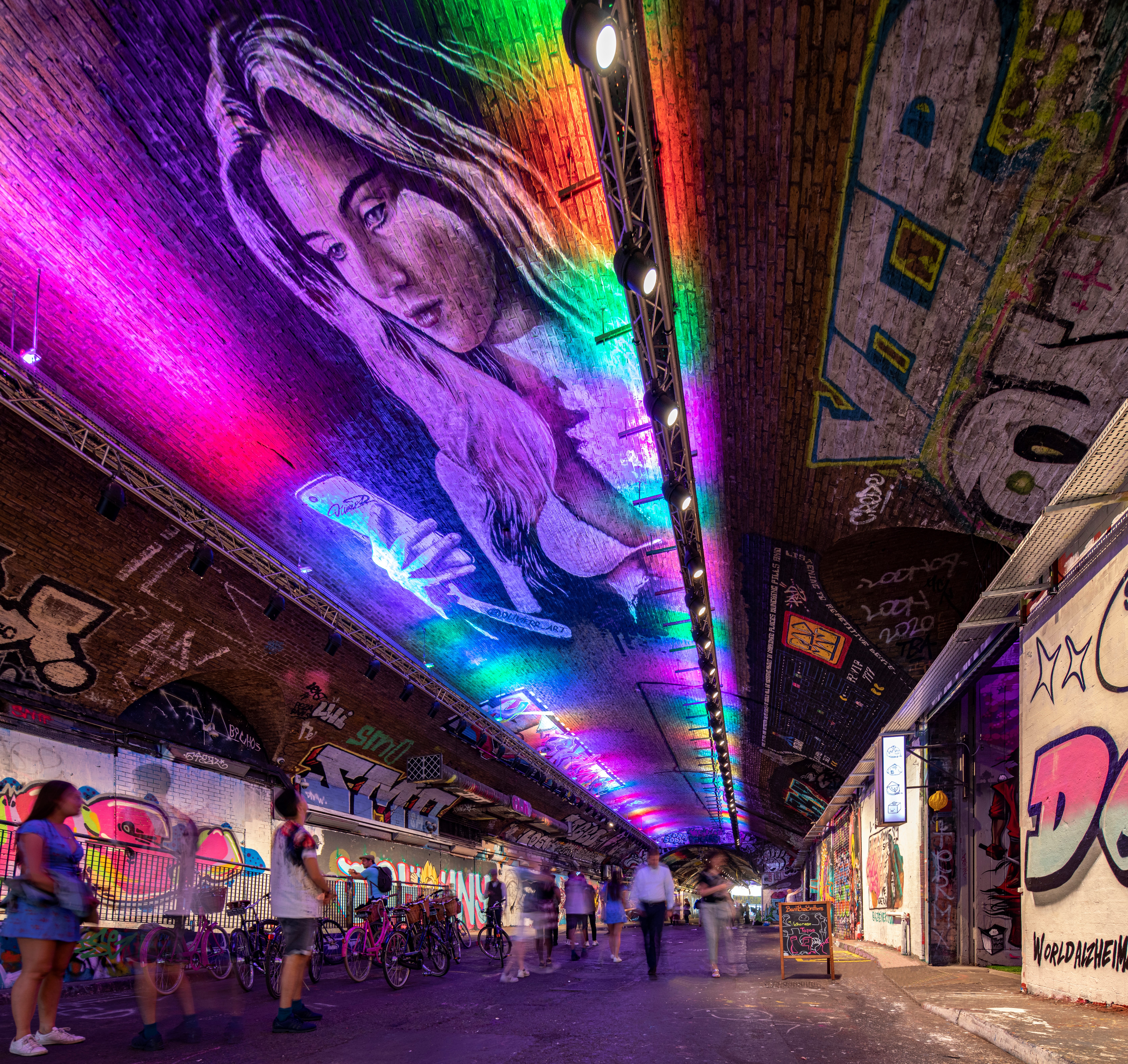 To find out more about the work of Sophy Robson, visit her official website www.sophyrobson.com where you can also find links to her Girl's Can and other graffiti workshops that she regularly runs in Leake Street.