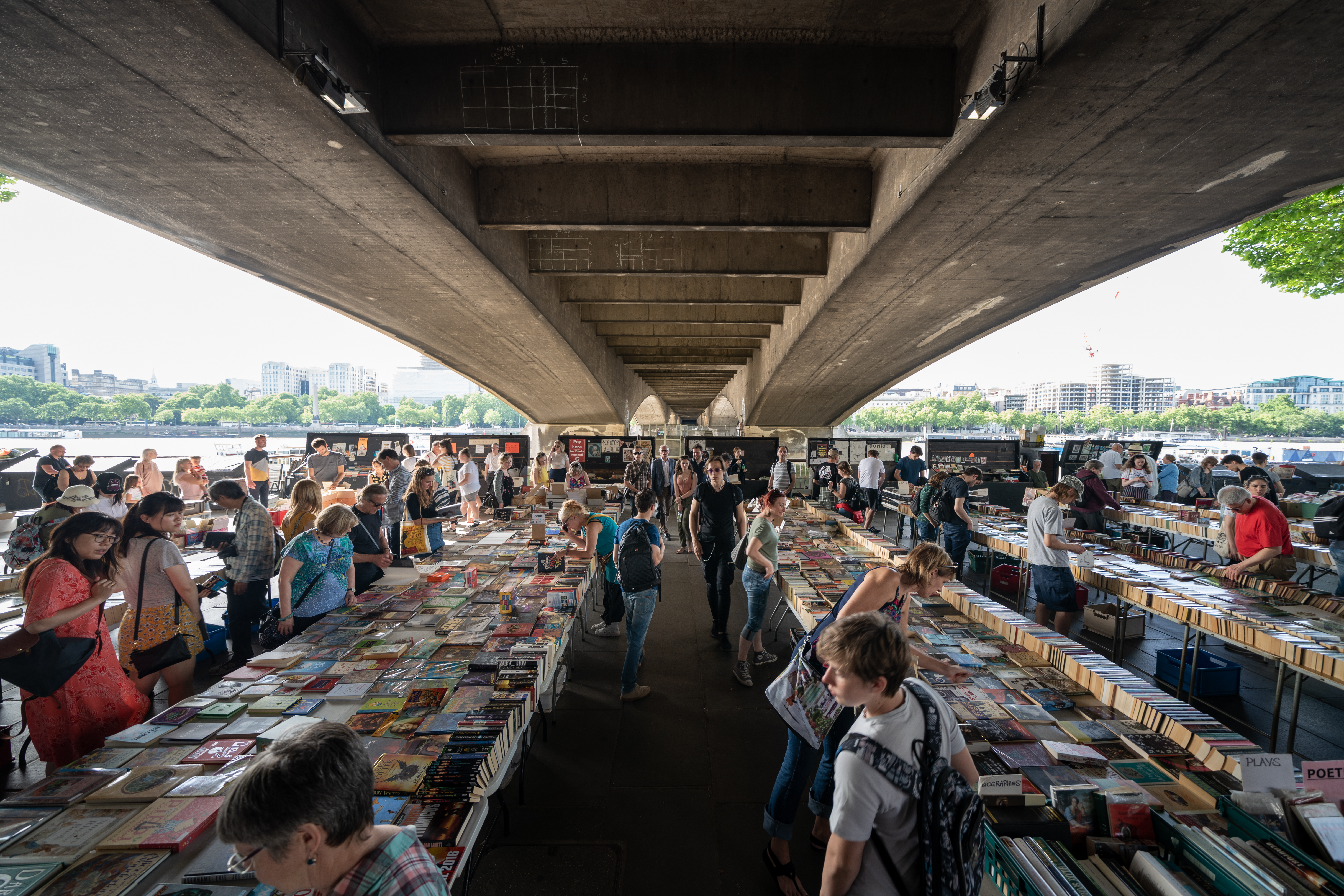 Like many of South Bank’s landmarks, the book market has a fascinating history behind it. From a couple of sellers that started off with a single box of books to flog to theatre goers, to becoming a hive of activity with over ten separate stalls and a fixture of the South Bank scenery. To uncover the story behind the many pages which have been poured through over the last few decades, we spoke to three generations of the same family who have worked at the market since it began.

Jean and her husband Eric were trading in Covent Garden in 1982 when they heard there was a spot to sell books on the South Bank by the National Theatre and that evening, they headed down to take a look.

“It was desolate, just boxes and no people until the evening performances at the theatres.”

That was South Bank in the early 1980s, known as ‘Cardboard City’ to many Londoners. It wasn’t the most enticing spot in the capital to set up a book market, but spurred on by the prospect of selling to the crowds drawn in by the likes of The National Theatre and Royal Festival Hall, the pair decided to take one box down and start selling books on the spot below Waterloo Bridge.

Whilst the market soon filled with other sellers, business remained slow, gaining the nickname ‘the graveyard’ amongst the eight different sellers, one of whom was Gerry Epstein, who according to Jean starred in Hollywood films during the golden age of cinema and was an old friend of Charlie Chaplin! Still, the slow trade didn’t deter the newly formed band of book sellers.

“We liked trading there as it was a good situation and soon, we attracted a small number of browsers but the only other attractions at this time were the theatres. Not many people had discovered the area.” 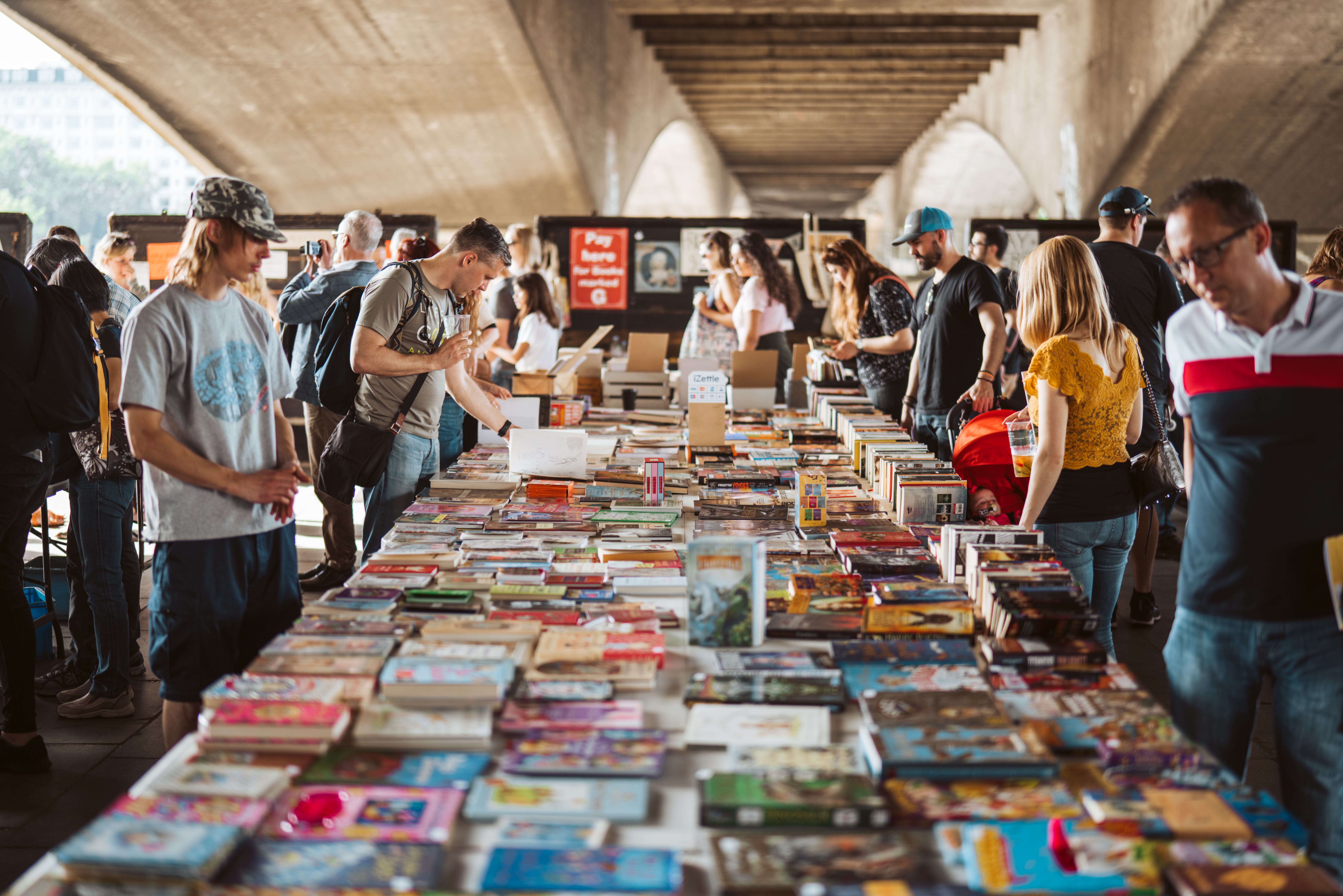 This all changed though in the 1990s, when South Bank was transformed by the work of organisations such as South Bank Employers Group and Coin Street Community Builders. The much talked about riverside walkway was finally constructed and an increase in visitors were drawn by the likes of the new aquarium at County Hall and, from 2000 onwards, the London Eye.

“It began to be a good trading place and more people were attracted to the market. People liked the fact that you could browse the stalls without having to enter a bookshop and they were under no pressure to buy.”

The newfound success of the book market meant that Jean and Eric’s business ended up expanding into a family one, with their daughter, son-in-law and two grandsons all plying their trade on the market too. We spoke to one of their grandson’s Josh and his partner Gemma about what makes the market so unique and why it’s so popular.

“I think we are unique selling second-hand books outside, with a picturesque scenery of the sunset and the river Thames.  We get a lot of people taking photos of our book market, and the sky is always different with the different seasons.  I think people like how unusual it is to see thousands of books displayed out onto trestle tables in the middle of London under Waterloo bridge and a lot of people like walking down the Southbank along the river, to grab a coffee and a book and read it on a bench.  We are often compared to the Paris book market which is also situated by the river.  The great thing about the market is that you can see the condition of the book and read parts of the book to see if it’s worth buying! People like the convenience of being able to buy a book straight away, in really good condition and read it on the same day.” 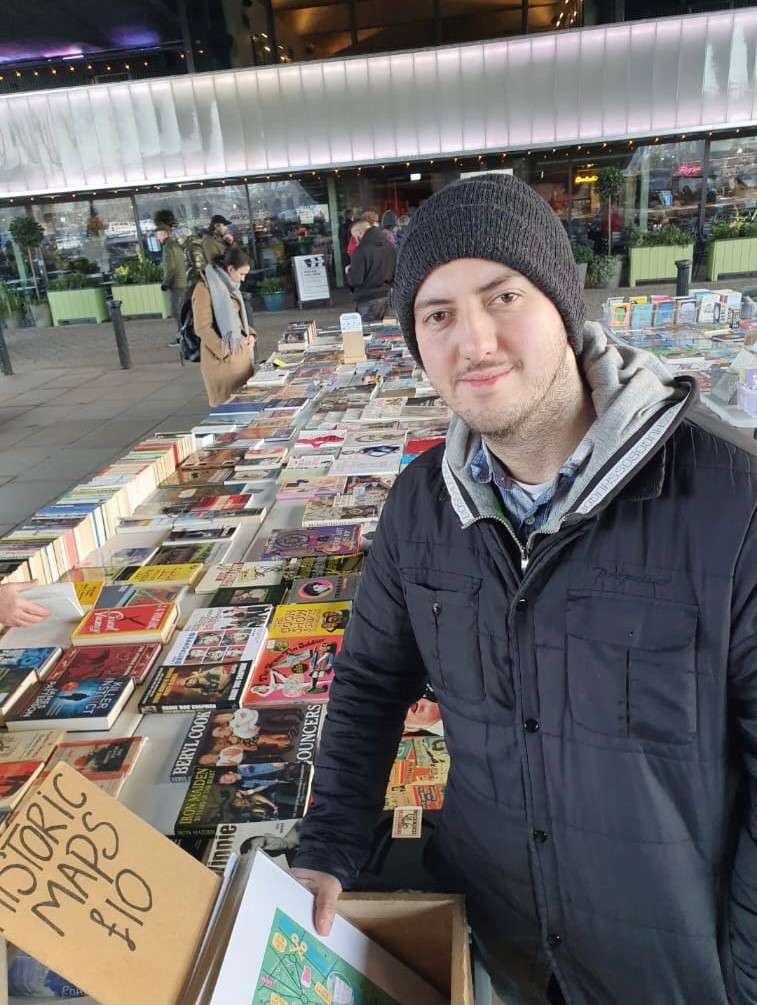 The popularity of the book market has led many a famous face to browse the stalls over years. According to Josh, Louis Theroux is a frequent customer, whilst the likes of John Walters, Ridley Scott, Jacqueline Wilson and the late Clive James have all been spotted. The scenic setting has also led to all kinds of TV and film appearances too, most notably Dustin Hoffman and Emma Thompson shooting a scene in the film Last Chance Harvey at the book market.

Away from famous faces, they have found that the market attracts a broad range of people, tourist and local alike.

“We get a lot of regulars, but we also get a lot of people come by that didn’t know we were there, so the surprise element is a bonus too. I think people also like the fact that we have different books every weekend. We are always updating our stock, so always have different books for people to see.  Also, as we are all different sellers, we all have different ideas and ways of laying out our stock, and the type of books we sell.  Some sellers specialise in antique books and prints, others in psychology and art, while we and other sellers like to sell a mixture of genres.”

According to Josh, the most popular book they sell is George Orwell’s 1984, with any copy rarely lasting more than a day on their stall. Polar opposite to the works of Orwell, the Mr Men and Little Miss series are also hugely popular, as are the classics, such as Sherlock Holmes and the works of Austen and Shakespeare. 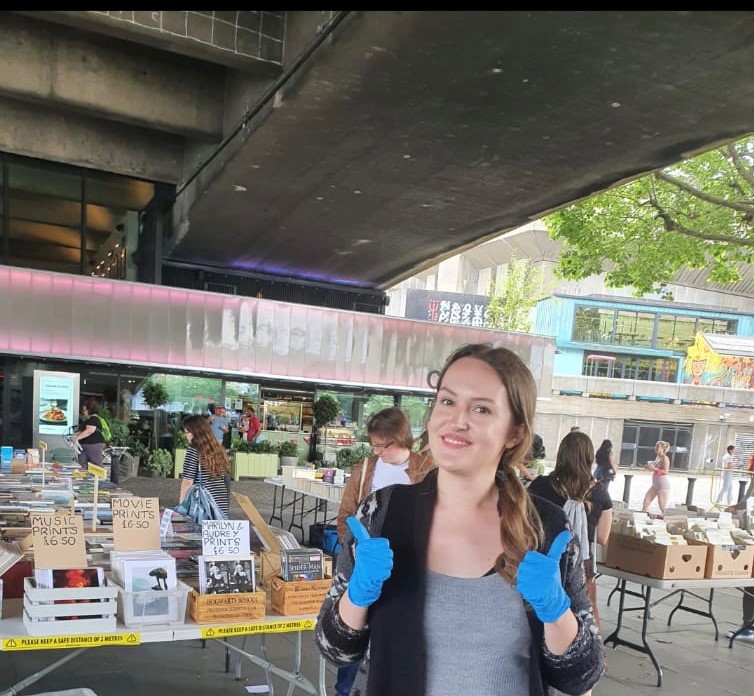 Josh and Gemma have had a stall of their own for four years now, but the last year has been particularly tough with the Covid-19 pandemic and lockdowns to contend with.

“We have really missed interacting with the customers. You meet so many interesting people who have a strong passion for books, and London in general, and it has been sad not to talk and meet people for so long. We also miss the rewarding feeling of selling books. As we hand pick the books that we sell ourselves, there is a great sense of pride when someone buys a book that you have personally chosen to sell. We also miss the atmosphere of the book market. There is always such a great buzz around the market and the surrounding area of the BFI, National Theatre and the backdrop of the Thames, with lots of people passing through daily, so it has been a shame not to be around this for so long.”

The South Bank Book Market will open for trading again on 12th April. Be sure to pop along for a browse if you’re coming to South Bank.