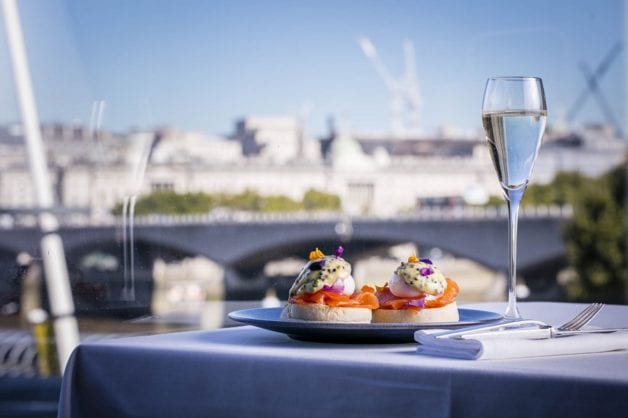 Join Skylon every Saturday for a two-course brunch, free-flowing champagne with a live DJ and sax music.

Enjoy two courses with bottomless bubbles for £48 per person. You can even an a dessert for an extra £5.

Skylon is the perfect weekend destination to spend a fun day out with friends, experience live entertainment, enjoy stunning views of the Thames and delicious food and drink!

Skylon takes its name from the iconic structure that was built on the South Bank for the 1951 Festival of Britain.

Skylon’s design echoes the style of the Royal Festival Hall during the same period with some contemporary touches, such as the uniquely designed chandeliers and surfaces of bronze, walnut and slate.

In spite of its popularity with the public, the cost of dismantling and re-erecting the Skylon in 1951 was deemed too much for a government. Speculation as to the Skylon’s fate included theories that it was dumped into the Thames, buried under Jubilee Gardens, made into souvenirs or sold as scrap.

Skylon Brunch is Back

Skylon’s weekend brunch is back!