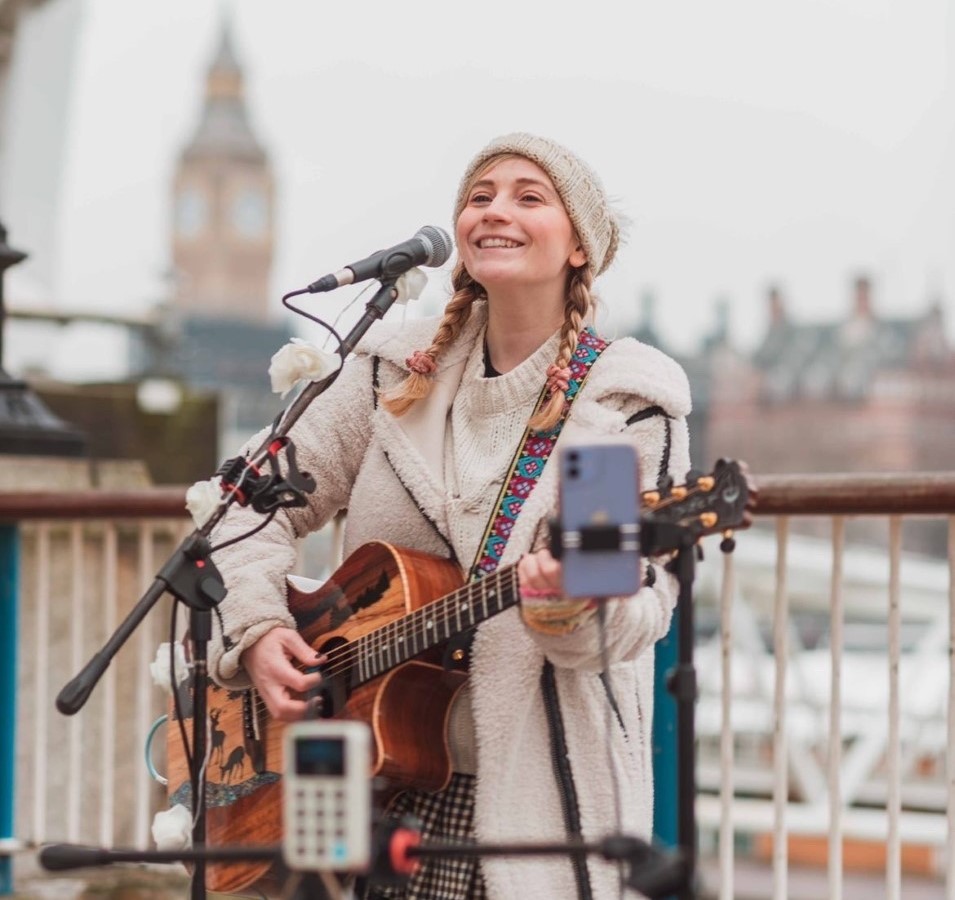 If you regularly walk down South Bank's Queen's Walk, chances our you've seen, or heard, Charlotte Campbell performing her unique musical stylings, guitar in hand, providing an upbeat soundtrack to one of London's most popular spots. Charlotte, a graduate of the renowned BRIT School in South London, has been lucky enough to make a living from music for ten years, but it wasn't until she was a teenager that she first picked up a guitar. Since then, she's thrived through using busking and street art to build a popular online fanbase, that have in turn led to sold out shows across London and slots at the likes of Cornbury, Henley and Glastonbury Festival.

Her musical influences include Joni Mitchell, Carole King, Taylor Swift and Alanis Morissette, commenting that she loves to see women telling stories through the songs they've written - something that never fails to give inspiration.

"I really admire women who’ve shaped the music industry and paved the way for the women in the future." 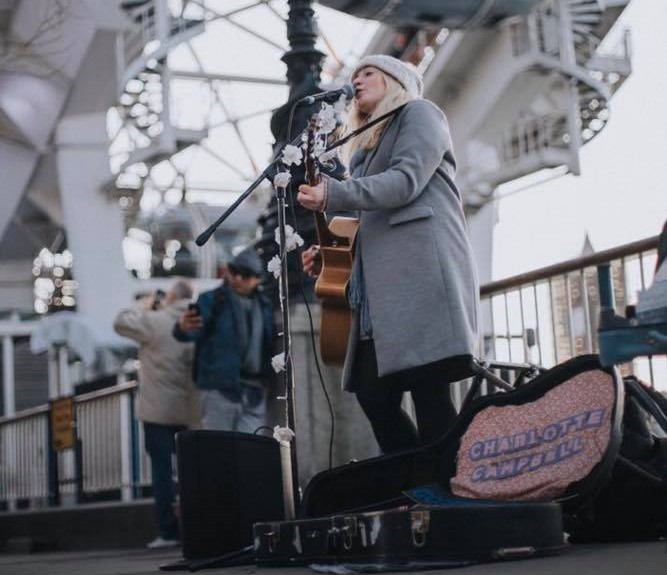 Whilst predominantly performing covers for her sets, Charlotte also loves to share her original songs stories - including a number of songs about busking itself.

"I always try to adapt my set list to whoever is in front of me. During the day I cater to the family crowd, even play a bit of Baby Shark and Frozen when the time is right. In the late afternoon I like to play more of my own songs and tell some stories along with them. And in the evenings Sweet Caroline and Livin On A Prayer are always winners!"

For Charlotte, South Bank has played a major part in her career and success to date.

"My busking journey started on the South Bank", Charlotte shares. "I started busking there in the summer of 2012, when London was buzzing with the excitement of the Olympics! I’ve continued to busk there, and across London, as well as in Germany and Switzerland coming up to 10 years now!"

Busking is still what Charlotte does day in and day out though, typically aiming to busk five days a week. We asked her what a typical day as a busker looks like.

"As its my full time job, I aim to busk 5 days a week. I hope to get 3 sets in on a good day, but sometimes the queues are long and I get less, sometimes I get lucky enough and play more! During my breaks I try to answer emails, write songs in Jubilee Gardens and take my busking coins to the bank."

"On busy summer days that I’m playing at the South Bank, I usually arrive by 10am. A few buskers will arrive for this time and we will decide between us who will start, then we take it in turns and we each play for one hour."

It was last Summer which really catapulted Charlotte into the social media limelight, when a performance on a sunny Queens Walk after lockdown restrictions had been eased turned into an outdoor dance floor, much to the joy of everyone around.

"It was an incredible evening, such a great atmosphere and it seemed like everyone was in the mood to join in and sing along. It was our first summer where it felt like lockdown was easing and the 2021 Euros were in full swing - England had won their match that day and London was in a party mood! Just one of those perfect concoctions of good weather, something to celebrate and the right songs to bring everyone together. I was so glad to have been part of it!"

If you haven't seen the clip, make sure to check it out here, a true example of the atmosphere that sunny days in South Bank can bring. However, it's easy to forget when seeing images such as those, that being a full-time busker takes a great deal of hard work, dedication and perseverance.

"It has its moments that aren’t glamorous; cold wintery days, sporadic downpours, lugging around heavy equipment and a lot of waiting around for spots. But if you’re committed to doing it, it is a great way to get your name out there to a new audience and you can meet fantastic people, both in the crowds and in the fellow buskers...I love being a busker, its been a huge part of my musical journey and it has helped me to improve my skill as a performer and as a writer." 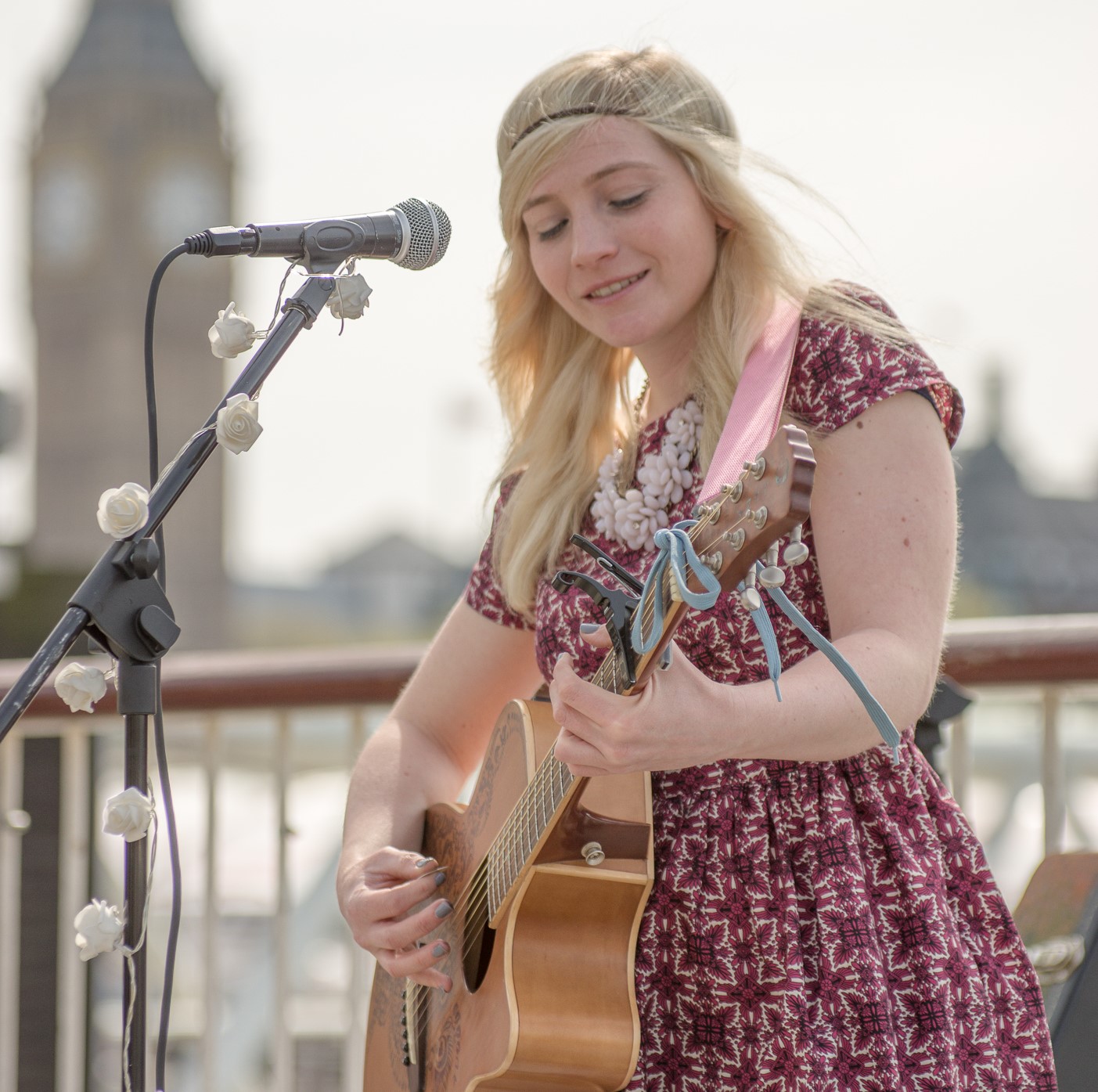 South Bank has long been a draw for street performers since the area was regenerated in the 1990s, and that originally drew Charlotte towards the popular riverside location, with its high footfall and well known tourist attractions.

"I think what made me stay, and continue to play there, was the culture of the South Bank and how much it embraces art, music and theatre. It feels like a place for creatives to gather and I’ve met the most incredible people along the river."

Growing up in the Western suburbs, coming to Central London was always exciting for Charlotte.

"I remember walking along the South Bank and seeing Big Ben as a child and I remember when the London Eye was built - the “Millennium Wheel” at the time - I thought it was the biggest thing in the entire world! Sometimes the South Bank feels like you’re in the centre of London’s skyline and its really magical."

And beneath the London Eye is where you'll most often find Charlotte's performances.

"My favourite spot is just under the London Eye, its a beautiful backdrop of the river and Big Ben. The spots along there are curated by the Southbank Centre and they also have another lovely spot under Hungerford Bridge which I also love."

Charlotte is releasing her own album, “On The Southbank” on vinyl this April, which will be launching at St Pancras Old Church in Kings Cross on the 21st. And remember, you can always find Charlotte performing along South Bank by the London Eye and Hungerford Bridge throughout the week, so make sure you stop by for a few songs.