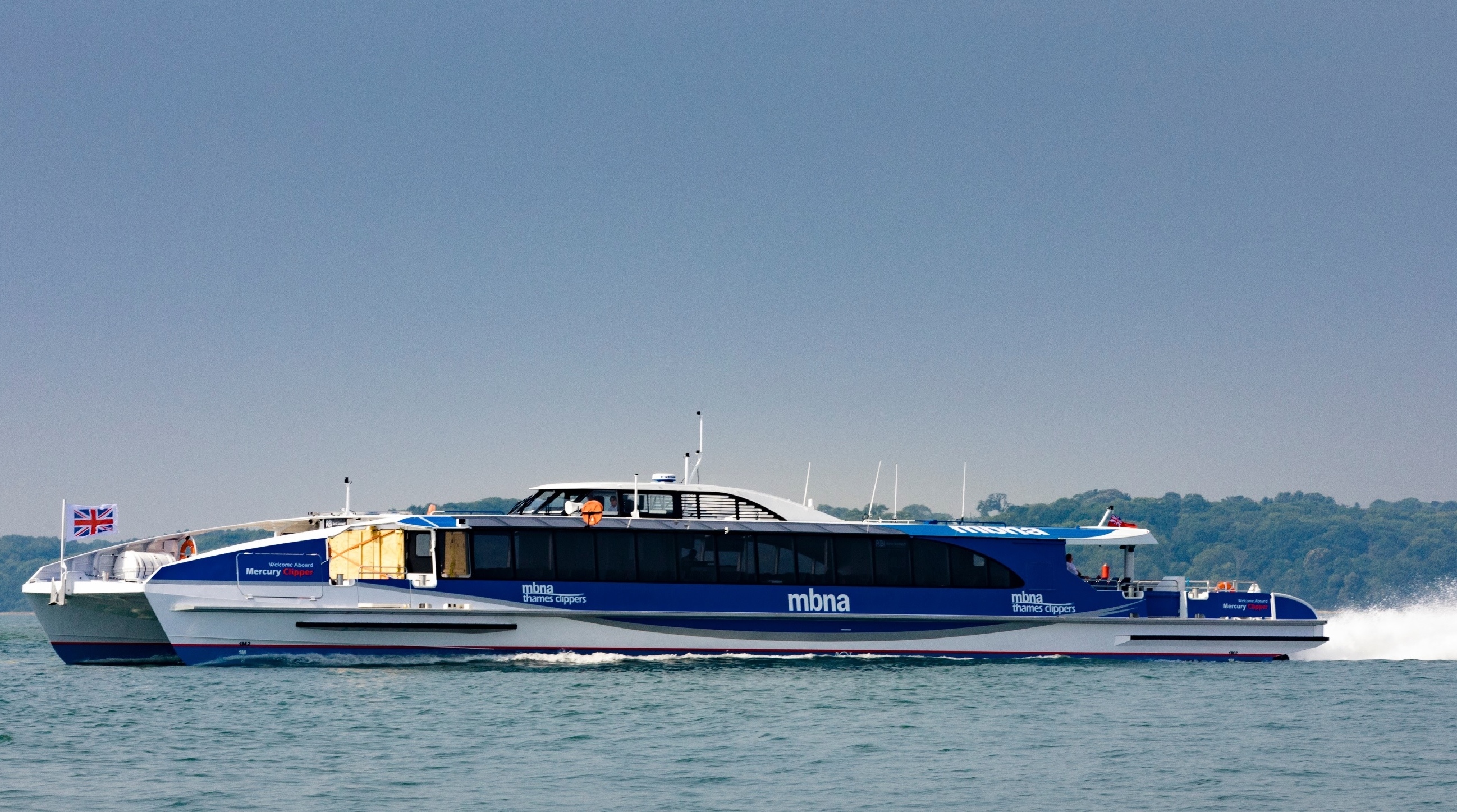 The newest addition to London’s river bus transport network is making its almost 200 nautical mile maiden journey to the Capital from the Isle of Wight. Joining the Thames Clippers fleet, Mercury Clipper, is the first of two new boats that will enter service in London this summer.

Six members of crew – with over 80 years of combined experience between them – will carry out the 12 hour journey, at an average speed of 20 knots. Travelling along the English coast, the boat will sail past landmarks including Spinnaker Tower at Gunwharf Quays, Brighton Pier and the White Cliffs of Dover to its home at Trinity Buoy Wharf in east London.

The two new 172 capacity passenger boats (Mercury Clipper and Jupiter Clipper), a £6.3 million investment in London’s port and transport infrastructure, have been built at the Wight Shipyard Co Ltd on the Isle of Wight. With the order, Thames Clippers has set the record for the largest fast ferry order for a UK ship yard in over 20 years with non-government backed funding.

Mercury Clipper and Jupiter Clipper took 10 months to build, creating over 75 new jobs across the Isle of Wight and London, including the hiring of two dedicated apprentices and engagement with over 100 local suppliers from across the South of England.

“We are excited to welcome Mercury Clipper and shortly Jupiter Clipper to the fleet. It’s fantastic that we were able to build these ultra-high specification catamarans here in the UK. This build marks a significant investment in Thames Clippers and London’s river network and I’m proud of it enabling investment in our team too,” said Sean Collins, Thames Clippers’ co-founder and CEO, “Mercury and Jupiter Clipper join the fleet following the two boats we added in late 2015 and combined, the four mark a 30 per cent growth in our fleet. Along with continued pier additions to the route, we are committed to ongoing investment in the Capital’s growing river network.”

Transport for London’s (PLA) dedicated RIDE models predict continued growth in river use with a forecast 7.9 million passengers by 2021 with several new piers planned including a potential six piers in east London.

Thames Clippers is committed to making the River Thames as accessible to as many people as possible and supports the PLA’s Thames Vision of doubling the number of people travelling by river and its target of 20 million commuter and tourist trips every year. Enhancements are moving at a considerable pace, by the autumn of 2017 three piers will have been added to Thames Clippers’ network since 2015, Plantation Wharf Pier, Westminster Pier and Battersea Power Station Pier. Services to Battersea Power Station Pier are due to launch on 18 September 2017 and will include all day and weekend services.